Logo Fun with the Tridion PowerTools

(05-Oct-2011) Update: See the final below or on the PowerTools Google Code site. 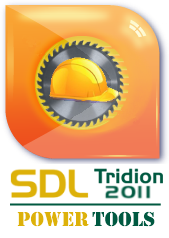 In the end we'll (hopefully) have one main logo and consistent branding for the Tridion PowerTools reboot.

I liked the third option and replaced the cartoon with an SDL Buddy...


Then Kunal Shetye played with the old school vibe to come up with three more ideas:

Graeme Wigglesworth suggested a variation with the hard hat on the logo...

(26-Oct-2011) Update: less than a day after posting this, we added Raul Escudero as another PowerTools committer bringing us to 30 participants. He even brought a new logo contribution below. 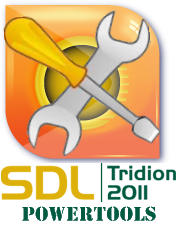 I'm not sure how we'll decide on the final logo with this is all great, creative work! Oh and just to be clear, we're also getting "real work" done. See the PowerTools site on Google Code for recent updates, including the "v1.1" release of a working tool.

We're still "working on" the logo and I'm sure there's more to come out of this.* Follow or join the discussion on the PowerTools group.

*Replace "working on" with "having lots of fun with."

(03-Nov-2011) Update: We're close to wrapping this up! Based on additional feedback, I stitched some ideas into the following candidates. We'll update and choose a winner in the next week or so. See if you can find your suggestions in the design elements.

Is the saw too scary? Good! Because these are (will be) power tools.

Actually we're working towards a relatively safe and useful tool set, but like any powerful, automated tools it's safer when you read the manual, understand the implications, and respect the power such tools offer.

(03-Nov-2011) (Almost) Done! See current winner 1B which we'll likely use after a final round of discussion, ideas, and suggestions. Unless we completely drop this line of thinking, the final logo will have elements from the following. 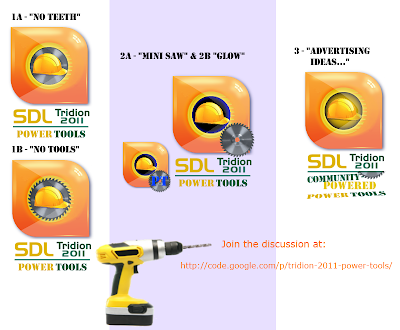 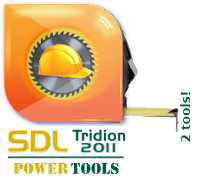 Column 3 is based on a idea from Ryan O'dell, aka "binarybasher." He pointed out we're missing the community aspect in the logo, something that's come up in past Skype chats with the PowerTools group.

We can play with the idea to start some sort of marketing campaign for the tools. To add to this, I felt the Tridion logo kind of looks like a measuring tape. See the last image above for something we can use to chart promote our PowerTools progress.
Shared by: Nivlong on 25 October